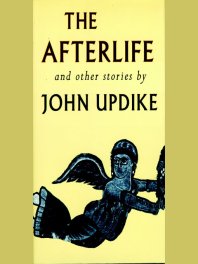 Updike is getting old.  Actually, he’s dead.  But when this collection of stories was published, in 1994, he was just getting old.  He reflects on childhood, growing children and grandchildren, marriages running out of energy, people running out of energy, and death itself – the terminus of the ultimately ausgespielt.  This does not make a very cheerful collection, but it has brilliant moments and a deeper, or at least more thoughtful and careful, approach than he took in his early years, when all he had was astonishing natural facility and the obsession with women that inspires and sustains nearly all art.

Without knowing anything about Updike personally, there are so many recurring themes and transposed characters in these stories that I guessed the following:  the author was 60 years old, he grew up in Pennsylvania and moved from a town to a farm at the age of thirteen.  He hated the farm, which aggravated his poor health and removed him from his friends, and he blamed his mother for the move.  He attended Harvard and met his first wife there.  They had (three?) children, then divorced.  He later remarried.

In fact, Updike was 62.  His relationship with his mother is speculation on my part, but everything else is correct.  His mother (who had recently died when he wrote this series) was obviously his greatest preoccupation.  But it is not easy for the reader to work up an equal enthusiasm.  The strongest stories are those which have the least of mother in them:  “George and Vivian” (a two-chapter story), “Farrell’s Caddie”, “The Rumor”, “Baby’s First Step”.  These are brilliant pieces.  The best of all, “The Rumor”, is also the farthest outside Updikean autobiography:  an unfounded rumor about an art-dealer gradually becomes true, as the subject begins to wonder how a rumor about him could be so widely believed unless it had an element of truth.

At least in these stories, Updike lacks a touch for strong endings, and, in particular, strong closing lines.  But this doesn’t come across as a fault – it suggests the stories continue in Updike’s mind.  It increases their verisimilitude.  The stories are not neatly capped on the end with a moral or a summary observation.  They are segments of real lives – the author observes one life for a while, then moves on to the next.  You could say it’s the best part of what an author ought to do.

I will always admire Updike for a metaphor:  “outside the sunshine is skating around on the pavement.”  That is exactly what sunshine does on a hot summer day.  He wrote that in 1961, in a story called “A&P”.  By some miraculous happenstance, “A&P” escaped my high school English department’s dystopian quality control and was the only good story we read in four years.  There is some of that in The Afterlife, but not enough.  The best stories are worth picking out of the collection, but the overwhelming desire I’m left with is to return to Updike’s early work and remind myself how well he wrote when he knew less.

714 thoughts on “The Afterlife: And Other Stories, by John Updike”