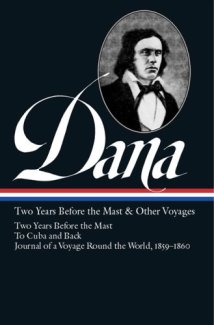 Every American boy should read Two Years Before the Mast. It’s exactly the sort of story that dominates a youthful imagination and sparks our careless sense of adventure.

In 1834, after a year at Harvard, Richard Dana Jr’s eyesight was getting bad and he decided the proper remedy was to do something that wouldn’t involve too much reading. So he signed for a voyage to California on a merchantman – a dangerous trip around Cape Horn that came near killing him on several occasions. But, as he notes in his diary, if you fall off the yardarm and are lucky enough to get caught in the belly of a sail instead of breaking your bones on the deck, you’d better laugh it off. Far from the carefree sailors’ existence that the sea stories of the imaginative but uninitiated desk-bound author picture, Dana’s accounts of climbing up the mast to spend an hour reefing topsails in an ice storm without even a jacket to wear make it clear that a sailor’s life was arduous and miserable and required a toughness of body and spirit that is strongly reminiscent of our modern military special forces.

Hard as this life was – and even intermixed as it was with months of monotonous though dangerous routine – it is so far outside our normal experience and the experience of the time that it has romance. Our imagination is fired at every turn – his description of life onboard ship, the meals, the language, the means of handling the sails (which involves an incredible amount of wonderfully obscure terminology) are fascinating. As is his beguiling opening description of a sailor’s outfit and his manner (“with a sun-burnt cheek, wide step, and rolling gait, [he] swings his bronzed and toughened hands athwart-ships, half open, as though just ready to grasp a rope.”)

Added to this are fascinating historical observations, in particular of the essentially undeveloped west coast. Californians were not yet Americans – they were largely Spanish Americans – and, in Dana’s view, the laziest people on earth (“there are no people to whom the newly-invented Yankee word of ‘loafer’ is more applicable.”) You might find them literally standing around waiting for their houses’ roofs to blow off. In contrast, the Sandwich Islanders (whom we today would call Hawaiians) were energetic and skillful sailors, and the most generous people Dana had ever met. The land around the “little harbor” of San Diego had a “naked, level appearance.” San Francisco was “surrounded by a fertile and finely wooded country” with a lonely presidio built on the highest point.

His description of the sight of Massachusetts Bay after a two-years’ absence is beautiful. The sailors’ insights he records are striking (“a good song is worth ten men”). But nothing beats his admonition that “we must come down from our heights, and leave our straight paths.” I don’t think I could do it myself, but I can admire a man who did.

448 thoughts on “Two Years Before the Mast, by Richard Henry Dana, Jr.”