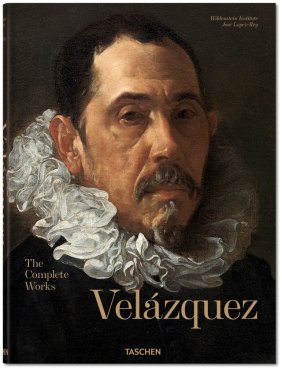 Every so often, Taschen produces a definitive and gigantic complete-works art book. The best of these was published in 2012 on Klimt and included absolutely stunning new photography of the Stoclet Frieze. It is almost certainly the greatest art book ever published. It also weighs nearly 20 pounds and comes in its own carrying case with a little handle, which I like very much.

The most recent addition to the series is a relatively modest 12 pounds, but it still has its own carrying case. It also comes with text by the great but long dead Velazquez scholar José López-Rey. His deadness has made it difficult to keep the text up to date as new information comes to light. The editors have done a good job with what is essentially a biography: the research is meticulous and overall it can still be considered definitive. But they have been rather cowardly in making any changes to the catalogue raisonné, and the wealth of new attributions made since López-Rey’s death in 1991 are stuffed noncommittally into a puffy preface.

The photography is very good, but not stunning as in the Klimt book. Of course it is vastly more difficult to rephotograph Velazquezes (permission-wise) so this isn’t a surprise. López-Rey’s interpretation of the paintings is reasonably good – hits and misses – and he does best in biography mode. He declares it impossible, for example, to say what Velazquez is painting in his definitive work Las Meninas – rejecting the obviously correct explanation that he is working on Las Meninas itself because, for such a scene to be physically correct, Velazquez would have to have his back to us so he could actually see the subjects he was painting. In reality, Velazquez never minded bending physics to create a better painting: In his fabulous and only surviving nude, the Rokeby Venus, a cherub-supported mirror allows us to see Venus’ face. It has been amusingly demonstrated that an actual mirror positioned as in the painting would show us a different part of the girl’s body entirely. Likewise, were the mirror on the back of the wall in Las Meninas actually to reflect the King and Queen at frame-filling size, they’d have to be standing right in front of it – not positioned as the painting’s viewers, visible in the mirror alone. Velazquez did what he had to do to make a brilliant composition – and so he faces the audience at his easel to save us the wretched and cloying frustration of Vermeer’s The Art of Painting.

Velazquez is among the greatest artists of all time. As a painter – a handler of oil paint – he is unsurpassed. He was accused of being lazy (“flemático”) because he could suggest detail without belaboring it. Look at Juan de Pareja, perhaps the greatest painting in this hemisphere: look at how Velazquez renders the texture of de Pareja’s hair (a black field, suggested only by detail at the edges, like an electron cloud). Look at the texture of the velvet sleeve, at the extraordinary use of white highlighting to create the lace collar.   Look above all at Juan de Pareja’s eyes and the supremely vigorous, commanding intelligence of the face. You not only see what de Pareja looked like – you can feel what it felt like to stand in front of him.