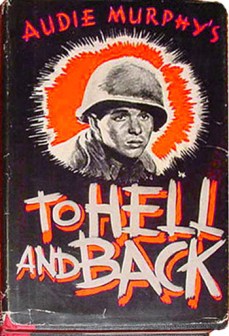 The great war memoirs such as Eugene B Sledge’s With the Old Breed and James Fahey’s Pacific War Diary are about the environment of war and the conditions under which it was fought. The greatest war memoirs – at the pinnacle is George MacDonald Fraser’s Quartered Safe Out Here – are about the characters, the individual personalities of the men that made up a fighting unit. The key to a man’s character is the way he talks: the dialogue that Fraser captured with so unerring an ear is what makes his book a remarkable achievement. Murphy’s book achieves this same greatness in the same way. To Hell and Back is as good as Quartered Safe Out Here, and that’s as good as it gets.

Audie Murphy was a slight 112 pounds and stood five foot five. In 1942 he joined the Army by lying about his age – he was seventeen. He was inducted as a private and promoted to corporal, sergeant, and, eventually, Lieutenant – and it is exceptionally rare for an enlisted man to make the jump to officer. At nineteen, he won the medal of honor for beating back a German tank and infantry attack: he held a line literally alone, calling in artillery as the Germans advanced and returning their fire from the machine gun on top of a stranded tank destroyer. The vehicle was hit twice by German 88s and he was wounded in the leg, but he continued to man the furiously burning TD for over an hour. Eventually the Germans were so close that he called in artillery fire on top of his own position. The Germans retreated. Murphy then went to find his own men. Instead of digging in or getting medical attention, he organized a counter-attack.

Murphy became the most decorated American soldier of the war. In addition to the Medal of Honor, he would receive the Distinguished Service Cross, the Silver Star, the Bronze Star, the Legion of Merit, the French Fourragere, French Legion of Honor, French Croix de Guerre, the Belgian Croix de Geurre, and three Purple Hearts. (He could easily have claimed more Purple Hearts, but he was busy.) He hated to be away from his unit and would simply ignore a command that kept him from the front lines. On one occasion he actually walked right out of a replacements depot and across country to his men after returning from the hospital – exactly like the hero in Irwin Shaw’s The Young Lions.

Incidentally, I had to look up his decorations (and my list, though extensive, is not complete) because you’ll find no mention of them in his memoirs – not of the Medal of Honor or any of the others.

There has long been a tendency to ascribe heroism to luck and circumstance. Originally this was to promote the idea that the ordinary soldier need not doubt his own courage (there’s an example of this in the great 1955 John Ford movie Mister Roberts). Later it became a way to cheapen heroism and allow anti-war protestors and draft-dodgers to claim that there was nothing noble or courageous about the men who were doing the fighting. (The claim, echoed by former presidential candidate John Kerry, was that these soldiers had just been unlucky and not smart enough to avoid the service.)

Luck is surely part of it – Murphy was less than inches away from death on numerous occasions. But the fundamental truth is that he was an extraordinary soldier: tenacious, imaginative, indomitable, courageous, quick on his feet, a born leader. If you think, for a moment, of what it means to be a real man, you’ll be thinking of Audie Murphy.