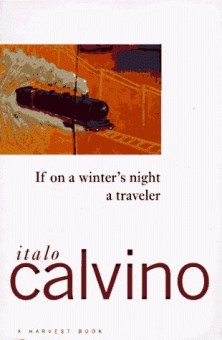 If on a winter’s night a traveler is a problem-novel. Like Nabokov’s Pale Fire, it has an internal and an external story, which circle around one another like a DNA double-helix. The reader has to work to figure it out. Calvino alternates chapters about a reader with chapters of the novels he reads. The first chapter-pair is declamatory, turgid, preachy, verbose and infuriatingly self-indulgent. So I was utterly shocked to discover that Calvino had pulled his act together by the second pair of chapters and produced an extraordinary novel that, at its best, is beyond first-rate. The book risks being too clever at times – it is a daring experiment, but ultimately a success.

In the first chapters, the only hint of the better work to come is a remarkable feel for imagery, to which Calvino grants ever-increasing freedom. Calvino’s absolutely brilliant visual imagination is reminiscent of Nabokov, and especially Kafka. Calvino confirmed in a published interview that he admired Kafka above all; many of his passages are extremely like Kafka and the overall structure is even more so. At the end of the first chapter, the protagonist’s abrupt expulsion recalls Amerika; later he pays a visit to the bureaucratic maze of a publishing office run by an elusive high official which unmistakably suggests The Castle.

Kafka is a dream-like environment in which the protagonist can never settle down: a group of strangers befriends the protagonist for no reason; he gets used to it. But as soon as he becomes comfortable, he is ripped away and whisked off to another new strange place. Calvino performs this operation on two separate tracks, in parallel: every time his unnamed protagonist settles into a novel he likes, the story breaks off suddenly for one reason or another. The protagonist tries to find the next chapter, only to discover he has begun a new, different novel, and must be drawn into a new story all over again. Accompanying this first track, the protagonist’s journey from one novel to the next begins in an ordinary, realistic environment, and gradually unravels itself in a progression of increasingly strange events. We start on a beach and wade deeper into Kafka’s ocean until we’re all under water. Only the narrator does not find his predicament as strange as he should – this too, is a staple of Kafkan writing.

Calvino explains clearly, through the mouth of a fictitious novelist character, what he wanted to achieve by ripping the reader out of the start of a story again and again: “The romantic fascination produced in the pure state by the first sentences of the first chapter of many novels is soon lost in the continuation of the story….I would like to be able to write a book that is only an incipit, that maintains for its whole duration the potentiality of the beginning.”

Once you move beyond the initial failure of the opening chapter, the stories that follow are so intense, vivid, enticing and so resplendent with imagery that you’re put in mind of a painting by Klimt. I will return to this book again, for fresh discoveries.

483 thoughts on “If on a winter’s night a traveller, by Italo Calvino”