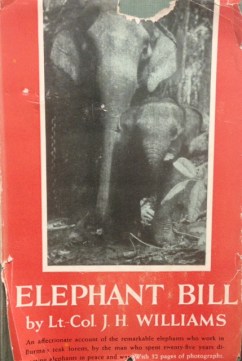 Lieutenant Colonel James Howard Williams, OBE, is Elephant Bill. He served in the British Camel Corps during the First World War and, after his discharge, got a job in Burma. He spent the next twenty years supervising the elephant teams that haul giant teak trees down to river’s edge.  The logs are lashed into rafts and floated down to sawmills in Rangoon or Mandalay. It takes a teak raft one year to make the thousand-mile downriver trip to Rangoon – if the elephants and their oozies (riders) have done a good job, placing the logs so that the river takes them when monsoon spate arrives.

When the Second World War came, Elephant Bill stayed in Burma to organize an Elephant Corps, which built bridges by the hundreds sturdy enough to take trucks and tanks. (Trucks did not fare well in Burma, especially during the monsoon season; the key to getting any stuck truck out of the mud was a helpful elephant.)

The best part of this superb book is the opening chapters where Bill describes his first encounters with elephants and the Bombay Burma Trading Company. The man assigned to train him, a snarly and mistrustful Englishman called Willie, immediately awarded four elephants to his care and told him to push off into the jungle for a few months: “You can do what you damned well like – including suicide if you’re lonely – but I won’t have you back here until you can speak some Burmese.”

Elephant Bill learned Burmese fluently and eventually had seventy elephants to supervise, scattered among a dozen different logging camps. He would constantly make the rounds, spending a week or two in each camp, until he got to know all the riders and all the animals – each elephant had a name, of course, usually suggestive of some physical feature or personality quirk: “Ma Pin Wa” (Miss Fat Bottom), “Ma Hla” (Miss Pretty), “Po Sein” (Firefly), etc. The noblest elephant of them all was Bandoola, named after a famous Burmese general: he was a gigantic tusker who led an entire train of elephants and Burmese refugees up a treacherous mountain path, eventually into India and out of the reach of the Japanese.

Elephants have roughly human lifespans and often keep one rider for life. By the time an elephant is twenty-five, he can usually respond to as many verbal commands – as well as numerous physical gestures which the oozie makes with his foot behind the elephant’s left ear. In a typical but impressive instance, a spear had been left standing next to an elephant and his oozie, perhaps not trusting the elephant to leave it alone, said “Pass me the spear.” The elephant picked up the spear with his trunk and offered it to his oozie, point first, at which point the oozie yelled, “Don’t be a bloody fool – pass it right way round!” As Elephant Bill writes, “With perfect calm and a rather dandified movement, the elephant revolved the spear in mid-air and, still holding it by the point of balance, passed it to his oozie, this time ferrule first.”