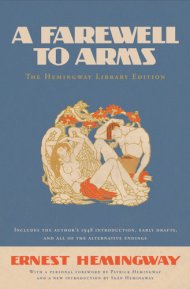 Hemingway’s draft endings for A Farewell to Arms show a dozen attempts to work in some sentimental reflection, but he couldn’t make himself sentimentalize, and the published version ends with a simple line of narration. Among the thirty or so titles Hemingway considered was The Sentimental Education – this too was discarded. Hemingway is unsentimental and straightforward. He speaks plain and to the purpose, like the soldier he wanted to be but never quite became. Hemingway would never have written, for example, that the rain sounded “like skeletons copulating on a tin roof” (a simile applied by Sir Thomas Beecham, less appropriately, to the sound of the harpsichord). If it was raining hard, Hemingway would say: “it was raining hard.”

He builds remarkable pictures from simple material – when his narrator’s dugout is hit by a mortar shell, for example: it was “a roar that started white and went red and on and on in a rushing wind.”

Hemingway himself, like his narrator, was an ambulance driver on the Italian front during the First World War. He too was wounded in the legs by mortar fire and received the Italian Silver Medal. He was with the Red Cross; his narrator was an American in the Italian Army. Most of the novel’s characters are based on Hemingway’s real-life acquaintances.

The Italian government hated this novel, which was originally published in 1929 but wasn’t allowed in Italy until 1948. Hemingway loved Italy, and he liked the Italians – but he writes like an honest reporter-novelist and his Italian characters have a stench of spiritual decay and helpless resignation. It is not only that they did not understand why they were fighting – that goes without saying. But they had largely concluded that it would be easier and better to be defeated immediately than to fight indefinitely for uncertain victory: It doesn’t matter who runs the country, thought the Italian soldier, so long as I can go back to my farm. It is this lack of spirit that allowed Fascism – which Churchill called “the shadow or ugly child of Communism” – to leech across Europe after the First World War and lay the groundwork for the Second.

Hemingway notes ironically that courage came to Italian soldiers as they got farther away from the front and less likely to be shot at. With adequate distance, some became so brave they began executing Italian officers retreating with their troops after the Austrian breakthrough in the Battle of Caporetto. When Hemingway’s narrator is nearly shot by these self-appointed “Battle Police,” he decides he’s had enough and escapes to Switzerland – where he stays, with his English nurse, rather than returning to America or Britain.

As a wandering interwar American, this character is particularly in harmony with the greatest war correspondent of the following war: William L. Shirer, an American who lived in Spain and France and married an Austrian who was living in Switzerland. He spent most of the 30s in Germany reporting on the emergence of Hitler and finally returned to America in 1940.

Every European convulsion needs an American voice to describe it. For the First World War, the voice was Hemingway’s.

1,111 thoughts on “A Farewell to Arms, by Ernest Hemingway”