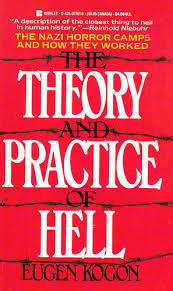 When I read Solzhenitsyn’s Gulag Archipelago and Yevgenia Ginzburg’s Journey Into the Whirlwind, I gained the impression that the Soviets were even worse than the Nazis – that they were, at any rate, fully as bad as the Second World War Japanese in barbarism and depravity. I made a distinction between Second World War Germans and Japanese because the Nazis treated captured American soldiers, by and large, vastly better than did the Japanese. But this is not enough. Eugen Kogon’s book about the Nazi concentration camps – and about Buchenwald specifically, where he was a prisoner from 1939 until the end of the war – is a reminder that, in the race to the slimy bottom of bestiality, the Germans, Japanese and Soviets were all of a piece.

Kogon has a fascinating chapter on the psychology of the SS – the Exemplars of the Master Race. They were not simply psychotics – though there were plenty such: a certain Master Sergeant Sommer decorated his room with an illuminated skull and “at night would sometimes summon a victim from one of the cells and leisurely do away with him in the room. He would then place the body under his bed and fall asleep peacefully.”

But the average SS man cannot claim insanity as an excuse – Kogon tosses off the interesting observation that “unlimited quantities of liquor” were available to the men on the murder squads. Drinking quelled any residual sparks of humanity – the SS called this “beating the inner son of a bitch.”

The “inner son of a bitch” is more often called “the conscience” – which Hitler fascinatingly and remarkably called “a Jewish invention, a blemish like circumcision.”

The SS were not insane: they were extremely stupid. They were men who had failed at basic education and in society generally, and who often as not had petty (or serious) criminal pasts. General Intelligence Questions on the examination for promotion to SS sergeant included: “What is the difference between a child and a dwarf? Between a ladder and a stairway?” Knowing things like that made you an SS intellectual.

The SS replaced Christianity with a pagan German mysticism; they had noble ancestries invented for them (lacking even the imagination to invent their own lies – “the heraldic devices of Himmler’s elite guard units were designed by prisoners and then entered in the official heraldic rolls…”). They were then given control over the lives of men who, by their very existence – by their continued survival – made the SS feel their inferiority, in intelligence, in spirit and in everything they did.

The inferiority complex of the German People would make a fascinating study – Shirer wrote in his Berlin Diary that Germans were distinguished by an inability to understand anything but a master-slave relationship among individuals and nations alike.

Today’s resurgent European anti-semitism is not fundamentally different. As long as the Jews continue to excel in everything – in education, science, literature, business, building democracies in the Middle East and especially in survival against all odds, which is the story of Israel and of the Jews – lesser, smaller, meaner people will continue to hate them for it.

The Theory and Practice of Hell, by Eugen Kogon.  Translation by Heinz Norden.  First published by Farrar, Straus and Giroux, Inc, 1950.  This edition 1982, 333 pages.

460 thoughts on “Modern Non-Fiction: The Theory and Practice of Hell, by Eugen Kogon”