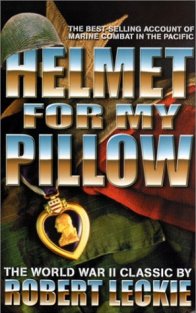 There are a variety of great World War II memoirs: Vincent Fagan’s Liberator Pilot, Robert Johnson’s Thunderbolt!, James Fahey’s Pacific War Diary, and Eugene B Sledge’s With the Old Breed. The greatest of all is Quartered Safe Out Here, by George MacDonald Fraser, who fought with a Cumbrian infantry regiment in Burma. It is not just a genre masterpiece but a masterpiece period – beautifully written and extremely funny besides.

Helmet for my Pillow, by Robert Leckie, is often mentioned in conjunction with the above, particularly with With the Old Breed, since both Leckie and Sledge were US Marines fighting in the Pacific. They were on Peleliu (pronounced “puh-lay-loo”) at the same time, though they didn’t know each other – Leckie was in the 1st Marines and Sledge was in the 5th. Peleliu was Sledge’s first campaign; it was Leckie’s last.

On Guadalcanal, Leckie’s had been the very last battalion to come off the front lines, after four months of continuous fighting. He was hit on the second day at Peleliu and evacuated to a hospital ship; a shell landed so close to him that he could neither walk nor speak for three days as a result of the shockwave. Sledge survived Peleliu intact to fight on Okinawa.

Sledge’s book is brilliantly written, exceptionally vivid and totally unassuming and unselfconscious. Leckie’s book isn’t. Unfortunately, Leckie strains towards a prose style that doesn’t seem natural to him – he has a tendency to swan off into long and overwrought passages smattered with metaphors that almost never work. It sounds as though he’s trying to write like someone else. He regularly muddles the punchlines of what would otherwise be his most illuminating and entertaining anecdotes.

This is a damper on an otherwise fascinating account of an extraordinary moment in history. To witness these events from the lowest, most granular level – as an enlisted infantryman – provides the best view of what the fighting was like. And it is striking that all the best memoirs from the war were written by enlisted men, with the exception of those about the Air Corps, in which all flying men were necessarily subject to the same danger – and all the pilots were officers.

Leckie finally hits his stylistic stride in the last, shortest and most important section of the book – Peleliu – where he relaxes long enough to tell the story in a simple and straightforward way much more becoming to him, and that forges a deeper connection with the reader. This is aided by the gravity and tragedy of Peleliu, where in short order so many of the men we came to know over the course of the book are killed. The fighting there reached a unique level of horror and intensity, in part due to the hard coral ground which provided little cover and reflected rather than absorbed shrapnel. On the first day alone, the 1st Marine Regiment suffered twenty percent casualties – two thousand five hundred men. But the Japanese got the worst of it, always preferring a suicide charge to surrender: Out of the original Japanese garrison of 13,600 defenders, only 202 were taken alive.

360 thoughts on “Modern Non-Fiction: Helmet For My Pillow, by Robert Leckie”