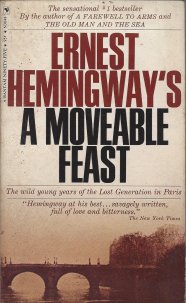 A beautiful little Hemingway show just closed at the Morgan Library.  Hemingway’s manuscripts, typescripts and galleys, all marked up and extensively rewritten, remind us how hard he worked to make his writing straightforward.  On display were the final paragraphs of A Farewell to Arms, which he rewrote twenty-nine times.  And the draft of Up in Michigan, the story Gertrude Stein called inaccrochable and which Hemingway tucked away in his desk.  It was one of the only stories to survive the catastrophic theft at the Gare de Lyon, when his wife Hadley lost the suitcase containing his complete work up to that point.  Hemingway describes the incident in A Moveable Feast – he couldn’t get mad at his wife, who was so choked by tears she could barely explain what had happened.  He ultimately concluded that it was better that his early stuff – including his first novel, never recovered – was lost and that he’d been forced to begin again.

He worked in his loft, which overlooked the rooftops of Paris, bringing up with him some wood for the stove and a bag of tangerines for the hunger (the tangerines would freeze if they were left overnight).  With all his walking and working and wife and baby and the general penury of a yet-unknown, he was hungry all the time.  But he wouldn’t let himself stop until he’d written something good.  And he wouldn’t stop unless he knew what was about to happen, so he’d be able to pick up writing the next day.  When he had trouble, he remembered that all he had to do was write one true sentence – the truest he knew – and the rest would come.  His advice is to write on the one thing you know more about than anyone.  He decided in a disciplined manner to write one story about each thing he knew about.

When he was done with a story he’d allow himself a drink of kirsch and then climb down to look for his friends.  His gossipy, sometimes moving and always funny stories of these friends make up most of A Moveable Feast.  He writes sympathetically of some, scathingly of others, always with the force of truth that he got in exchange for not caring how the named personalities would react.  Many of them were dead by the time this book about the 1920s was published in 1964 – and so was Hemingway.

Ezra Pound once left him a jar of pure opium that was to be given to the poet Ralph Cheever Dunning in the event of an emergency.  Hemingway knew the emergency had arrived when a concierge showed up and announced, “Monsieur Dunning est monté sur le toit et refuse catégoriquement de descendre.”  Dunning had come down from the roof by the time Hemingway got there, but he wasn’t in a particularly good mood:  he threw the jar at Hemingway, followed by a salvo of whatever objects came to hand.  Hemingway concluded, “For a poet, he threw a very accurate milk bottle.”

See also: A Farewell to Arms

808 thoughts on “A Moveable Feast, by Ernest Hemingway”