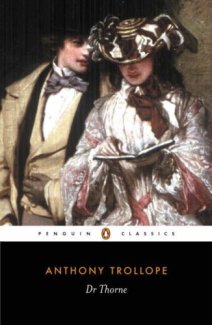 Anthony Trollope is one of history’s most lovable (and therefore least Ayn-Randish) novelists, though he’s often slandered as a second-rate Jane Austen. The chief complaint against his work seems to be that there is too much of it – that anyone who could produce 47 novels while simultaneously earning his living as one of Her Majesty’s Post Office Inspectors couldn’t have taken writing terribly seriously. Critics find his tremendous natural facility rather annoying.

The other great complaint against Trollope is often lodged against Miss Austen as well – he’s just too enjoyable. His books are too charming. You’ll have too good a time, especially if the romance works out in the end, which it often does. You’ll be sorry when the book is over and you’ll wish you could read what happens to the characters later in life. Apparently, this is unacceptable. You’re supposed to finish a novel with the gained knowledge that life never ever works out and a bad migraine.

Trollope belongs to a small category of writers who are so entertaining, so witty and so charming that their work is practically medicinal (EB White is another such). I first read Doctor Thorne to help me over a bad cold and it was better than chicken soup or Zicam. This was my second reading, and Doctor Thorne stands up as my favorite of the dozen or so Trollope novels I’ve read (most of which are brilliant).

When you’ve finished this book, you’ll wish the story would continue. And, in a manner, it does: This is the third of six “Barsetshire Novels,” a series which displays Trollope’s unsurpassed ability to invent not just stories but entire living, teeming worlds: Each novel in the series chronicles the residents of a fictional county (Barsetshire) and the main characters of one novel float delightfully in and out of the others as their histories overlap. Trollope builds the county, its towns and countrysides in startling detail; he creates hundreds of real personalities and holds them all in his mind as each moves around from day to day, doing what he would ordinarily do, getting on with his life. Trollope could have gotten fifty good novels out of Barestshire. We’ll have to be satisfied with six.

Doctor Thorne is the perfect introduction to Trollope (the order in which you consume the series doesn’t matter, and each novel stands by itself). Should you ever feel exhausted by the cynicism and relentless drive of city living, this is your escape into greener pastures.