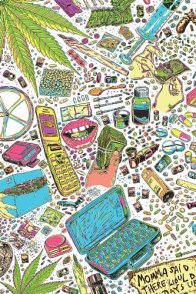 Madsen is a roving reporter of the streets of New York;  he wrote a good piece in Gothamist on panhandlers, of which his extensive knowledge is the result of almost three-hundred interviews:  when someone asks him for a buck, he offers ten in exchange for a short chat.  It’s a serious-reporter approach to learning the city.  Joseph Mitchell would have approved.  These panhandler interviews are collected on a website called “Word on the Street, New York,” and I would gladly pay for a carefully selected volume of the best.  (Some of them are tedious, but others are brilliant nuggets of language and life at the bottom end.)  That book has yet to be published, so I found this one instead, tangential but related: a series of Madsen’s interviews with low-level drug peddlers, messengers and connects.

This is another part of New York I don’t know anything about, but the interviews suggest the traffic in the city is much higher than I would have thought:  the first conversation is with a doorman in a luxury high-rise who doesn’t deal drugs, but is often asked by his tenants for a connection.  He estimates that 30% of the tenants in his building use something, which would be an astonishingly high figure, if we could validate it.

I know some people who smoke weed, but, outside this book, my only experience with drugs in New York was an East Village encounter with a nice Dominican who nearly slipped off an icy corner into a big puddle of sludgy, freezing water:  having saved his balance at the last moment (and it was an impressive feat) he stood up with his arms in the air like a circus performer and came over to strike up a conversation with me, the only nearby pedestrian, which he inaugurated by saying, with a huge smile, “Did you see that? Any other nigger woulda fallen right in that shit!”  After thanking God at some length for the myriad glories of our world and discussing his girlfriend and his impending trip to Florida to visit his grandfather, he decided to smoke a celebratory joint, which he rolled and then stuffed in his pocket just long enough to curse merrily at an NYPD van which happened to roll by.  I’ll say he was a lot more relaxed than most New Yorkers I know. He reminded me of a panda bear.

Most of Madsen’s interviews are with bicycle couriers who work for a “serve” – they peddle around all day delivering drugs (mostly weed) to “custies,” who place orders by calling a central dispatch.  It really is a miracle of efficient free-enterprise.  A courier who works five days a week might expect to earn $40-50k a year, provided he remembers to dress in an appropriately preppy fashion (button-down shirt, nice shoes) so he doesn’t look suspicious heading into the fancy buildings where most of his customers live.  If Madsen had more discipline, he would have converted these interviews into a real book on the subject.  But the raw material is fascinating anyway and Madsen did a fine job getting it.