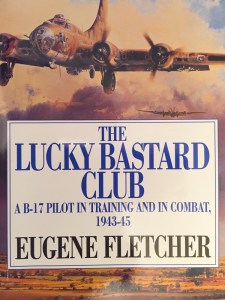 This memoir is a fascinating companion to Truman Smith’s The Wrong Stuff, which I reviewed last month.  Lt Eugene Fletcher was a B-17 pilot assigned to the 95th Heavy Bombardment Group;  Lt Truman Smith was with the 385th.  The two men never met, though their bases were only thirteen miles apart and they flew on several of the same missions.  Their descriptions of the same events flown from different viewpoints make a fascinating comparison.

The deeper you dive into the fabric of WWII recollections, the more familiar encounters you can expect – for example, Fletcher flew the October 12th 1944 mission to Bremen, during which one of the escorting fighter pilots famously became an “ace in a day”:  the pilot was Chuck Yeager, who almost exactly three years later became the first man to break the sound barrier.

Fletcher’s and Smith’s combat tours overlapped by slightly less than a month: Smith arrived in England at the beginning of April, 1944.  When Fletcher arrived in July, fresh out of training, Smith had already flown twenty-eight missions and had the most experienced crew in his group.  The air war changed dramatically in that short window, and the two men had very different experiences completing their thirty-five missions:  Enemy fighters were a constant terror to Smith’s crew, but the Luftwaffe was largely destroyed or dispersed by D-Day and Fletcher’s gunners only rarely got a chance to shoot at a Nazi plane.  Near the end of Fletcher’s tour, it was judged that a single waist-gunner was sufficient and crews were reduced from ten men to nine.  The greatest threat by then was radar-guided flak, which was balanced by new allied counter-developments:  “Mickey” radar that allowed bombing through cloud-cover, bundles of radar-confusing aluminum strips called “Window”, plus, near the end of Fletcher’s tour, a radar-jamming device codenamed “Carpet”.

The Lucky Bastard Club is actually two books, which were originally published separately.  The first book, Mister, is the story of Fletcher’s learning to fly and is a wonderful account.  The Army Air Corps took training extremely seriously:  through pre-flight, primary, basic, advanced, transition training and crew formation, it was eighteen months before Fletcher was ready for his five-month tour of duty.

The second book, Fletcher’s Gang, is the story of his time in combat.  Whereas Mister is a straightforward narrative, here Fletcher uses the letters he wrote to his wife, supplemented by the short but pithy accounts of his Navigator, Robert C Work, and his Bombardier, Frank S Dimit.  If the story thus told has less continuous flow, it gains tremendously from the immediacy of these primary sources.  When you take the hazards of this most dangerous theater of the air war, and stack them against the courage, the initiative and the maturity it took for a twenty-two-year-old to lead his crew on a nine-hour flight to knock out a Nazi oil refinery and save the free world, the impression is almost too profound to be recorded.  You’re astonished by the achievement, thrilled by the excitement, and proud to be an American.

915 thoughts on “The Lucky Bastard Club, by Eugene Fletcher”