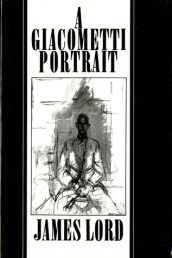 When Paris was liberated in 1944, James Lord followed in the rear of the American Army in the capacity of an intelligence officer (he spoke French perfectly).  With precocious audacity he went around introducing himself to the artists and writers he admired most.  Picasso was intrigued by Lord’s unmarked G2 uniform, and amused when the young soldier fell asleep on his couch.  Lord notes that he was only pretending to be asleep, with the object of endearing himself to Picasso—it seems to have worked:  Picasso made several drawings of Lord and Lord later described the relationship in a fascinating book, Picasso and Dora.

Lord also bumped into Jean Cocteau, Balthus, Jean Genet and others.  But there was no fascination like Giacometti.  He remained friends with Giacometti for years, and, on a return trip to Paris in the 1960s, Giacometti agreed to do his portrait.

Lord himself wanted to be a novelist, but wasn’t. He was, however, a fine writer, with a sharp eye and good ear.  His 1985 Giacometti biography, which he spent fifteen years researching and writing, may be the best art biography of all time.  Yet it isn’t even Lord’s best Giacometti book—this diminutive volume has that distinction.

The portrait was supposed to be a sketch in oil on canvas, done in one or two days.  But inevitably Giacometti became fascinated.  He was endlessly frustrated in his attempt to make a person exist on canvas, and, after eighteen days—during which Lord postponed his return to America several times—the portrait finally hit the deadline of an approaching exhibition.  Giacometti had made progress, he declared, had gone further than ever before.  But he was also dissatisfied, as always (he claimed never to have “finished” a painting in his life).  The portrait, a gift to Lord in exchange for his posing, was shipped to the gallery exhibition still wet.

While Giacometti painted, Lord paid furious attention to everything Giacometti did, and scribbled notes during brief breaks or after the session was over.  (Giacometti usually got up at one in the afternoon and worked until the early hours of the morning, with a few intermissions at a nearby café.)  Lord also had the foresight to bring a small camera with him and photograph the painting’s daily progress.  The series of photographs alone, though they are slightly out-of-focus and imperfectly exposed, are a unique and extraordinary portrait in themselves.

What the pictures show, and what Lord reveals in his description, is not the gradual march of a painting from beginning to completion, but of a continual and unending cycle of creation and destruction.  Giacometti worked quickly, starting in black and grey, always concentrating on the head.  He eventually added the highlights in lighter greys and white. The use of white increased as he worked on the points that displeased him and the image began to disappear.   Finally, reduced almost to nothing, Giacometti would begin again.  The final portrait contains a hundred of these cycles, images painted one over the other.  The art that emerged and the intensity it contains distinguishes Giacometti as the noblest artist of the 20th century.  The little book that emerged, a masterpiece in 117 pages, remains the greatest book on art I’ve ever read.

419 thoughts on “A Giacometti Portrait, by James Lord”