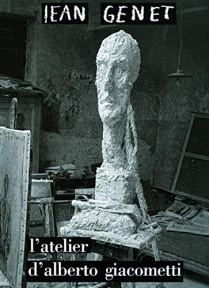 This inviting little volume includes thirty-three excellent photographs by Ernest Scheidegger and a famous, short text (around 45 pages’ worth) by Jean Genet.  I don’t know the exact length, since the publishers, with typical French artistic pomposity, decided it would be beneath them to actually number the pages.

Jean Genet was a writer, a poet, a contemptible liar and a thief.  He was a friend of Giacometti’s, an astute observer of his art, was portrayed by him several times, and stole Giacometti’s best drawing of Matisse.  (The drawing was never returned, but a stranger sold it back to Diego Giacometti sometime after his brother’s death.)  James Lord, the great art writer and Giacometti biographer, recounts the story of the theft in his wonderful book Some Remarkable Men, and describes Genet as “vain, mendacious, imperiously unprincipled…and an eloquent champion of ideals which he did not believe.”  But he adds that Giacometti was extremely fond of this little book and that Picasso considered it one of the finest ever written about an artist.

The text is an artful attempt to transpose Giacometti from painting to writing, rather than a documentary account of Giacometti’s studio and his working-process.  There are several fascinating fragments of conversations with Giacometti and some passages that convey the feel of the studio.  Most of all, Genet tries to express the feel of the art itself, occasionally with brilliant success.  The text is free-flowing prose-poetry that sounds like a conversation he might have had at a late-night Parisian café with some stranger who sat down and said, “Now, tell me all about Giacometti.”  (The text is complete with interjections—“Dare I say it?” or “I certainly put that badly; let me try it this way….”)

Genet observes that the space around Giacometti’s sculptures “vibrates” and that they leave nothing at rest.  In one of his best passages, he describes the sensation of touching the sculpture (which you can still do at the Centre Pompidou if you bring an attractive friend to distract the guards):  “Joy, well known and unceasingly fresh, of my fingers, when I ‘walk’ them – my eyes closed – over a statue….At the home of some friends who have two small statues, exact copies of Donatello, I want to repeat the experience with them: the bronze is unresponsive, mute, dead.”

In Giacometti’s studio, “a man is dying slowly, consuming himself, and before our eyes, transforms himself into goddesses.”  The goddesses are Giacometti’s sculptures of women—or more properly, the women themselves, since Giacometti’s whole life was a struggle to compress into painting and sculpture the same force of existence, the same impression of “thingness” he found in life itself.  Watching him work, Genet writes, “I have the moving spectacle of a man who never makes a mistake and yet constantly loses.”  Giacometti would have been the first to admit—in fact, admitted all the time—that he was doomed to fail.  His relentless struggle made him one of the greatest artists of the 20th century.

L’Atelier d’Alberto Giacometti, by Jean Genet. L’Arbalète, 1963.  Who knows how many pages.

Note: This book is in French; any awkwardness or inaccuracy in the translations is my fault.