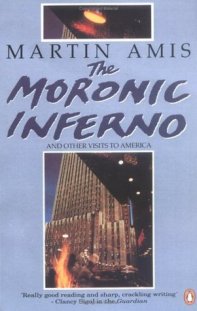 Amis says in his introduction that he had often been asked to write a book about America.  Then he looked at the essays he’d done over the last fifteen years and realized he already had.  And this is it.

Wrong.  This is a book of brilliant literary criticism – profiles of Bellow, Roth, Mailer – into which essays about Reagan, evangelism and AIDS fit like pieces of a jigsaw puzzle squished in the wrong way around.  Amis has nothing to tell us about America except what he picked up from reading the writers he writes about.  Such smug phrases as, “the suspicion and contempt that America traditionally accords to its poor,” are the sort of thing you’d expect Gore Vidal to spout at a swanky cocktail party safely removed from the nether classes.

But Amis can write.  To get an idea of the seductive power of Amis’s style all you have to do is look at the endorsement blurbs on the back of any book he’s published:  they all try to write like him.  And they all fail.  The reviewers are mesmerized by a visual imagination which seems (to use the descriptor Amis applied to Updike) suspiciously frictionless.  So they reach into their own brains for the most pithy, surprising and energetic similes they can find, like little kids trying to copy a magician’s card trick (ha!), and they come up with such gems as “laser-keen eye” or “efficient as a flick-knife.”  I think they’re hoping that Amis will see their reviews, be impressed with how well they write, and decide not to kill them.

Amis’s attitude towards America is – or was when this collection was published, in 1986 – the sort of snide condescension that American intellectuals have relished since the 60s.  They like to talk about America with dainty disdain and an implied personal separation, as though they themselves are not Americans.  They would much rather be taken for Europeans.  But Amis, I suspect, is a secret American.  His obsession with America, and with everything that is wrong with it, reminds me of the highly entertaining ex-Top Gear star Jeremy Clarkson:  You get the feeling he wants to persuade himself more than anyone else that America is worse than Britain, so he won’t have to regret where he was born.  I suspect he regrets it anyway.  Amis reminds us twice, with amusement, subtle snobbery and a hint of something else, that success for an American writer is superstardom, compared with the English version of literary success:  “an English writer might warily give up his job as a schoolmaster, or buy of couple of filing cabinets.”  Amis is, of course, an American-style success now, much as he may feel the need to continue being British.  He married an American and moved to Brooklyn.  You can’t get more American than that.

This is a valuable book but it needs threshing – the literary profiles are worth rereading;  the political essays aren’t worth reading at all.

346 thoughts on “The Moronic Inferno, by Martin Amis”