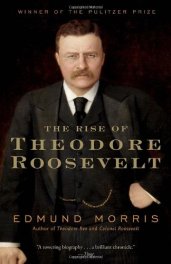 Edmund Morris won a Pulitzer Prize for The Rise of Theodore Roosevelt, and he deserved it. He might have deserved it for the prologue alone, which, in a scene set at the 1907 New Year’s reception at the White House (at which TR managed to shake, in the space of just a few hours, 8150 hands), conveys an extraordinary, gripping, vivacious character sketch which is the best I’ve ever read.

A young American boy who grows up without this book on his shelf leads a childhood deprived. You certainly won’t learn, in elementary school, high school, or college, anything at all of what the man was actually like. He was routinely described, by almost everyone who met him, casually or professionally or diplomatically and in any social sphere whatsoever, as “the most remarkable man I ever met.” In almost every respect, he is an ideal model of American manhood and manliness.

He was a scrawny and a sickly child – so asthmatic that he often had to sleep sitting up in bed. Being exhorted by his father to cure himself by building his body, he did so so obsessively that, many years later, veteran cowboys, mountain climbers, woodsman and soldiers all would contend that he was also the toughest man they’d ever met. A typical, but not unusual, story concerns a hunt where his horse pitched him into a wall, gashing his head and breaking his arm. He got back on his horse and galloped through fifteen more fields before the hunt ended, whereupon he could be seen riding home with a smile on his bloody face and his arm dangling at his side, the bones having slipped past one another. Another time, camping out west in the freezing cold rain, without shelter and in four inches of water, a comrade thinking on his own misery was astonished to hear Roosevelt saying, “By Godfrey, but this is fun!”

He combined a genuinely Navy Seal-like toughness and courage (he did not just lead the charge up San Juan Hill, but was quite literally the first man to get to the top) with equally extraordinary learning. He had read, by his early thirties, about twenty thousand books, and his photographic memory recalled every detail. He could discourse learnedly with French and German diplomats in their own languages, quoting their own publications back to them or reciting in full a poem brought up in passing. He could keep pace with technical experts in any field – indeed, in conversation at least, he outpaced all but the heartiest. As an author himself, with a forceful if not artful style, he achieved great renown starting with his very first book, The Naval War of 1812, which he published at age 26 and which remains the definitive history. It was immediately ordered stocked in the library of every US Navy ship.

Add to this the endorsement of professional politicians who – whether friend or foe – had to admit he was the ablest natural in their field they’d ever seen, and you begin to get a picture of Theodore Roosevelt. But now I’m beyond my word limit, so read the book.

The Rise of Theodore Roosevelt, by Edmund Morris.  Published 1979 by Random House, 920 pages.

1,541 thoughts on “Contemporary Biography: The Rise of Theodore Roosevelt, by Edmund Morris”