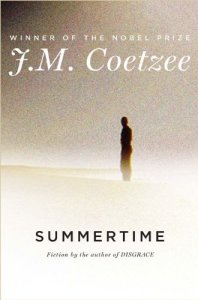 Summertime was a finalist for the Booker Prize in 2009. The rumor is that it didn’t win because Coetzee was already the first author to win the prize twice and three times would have been overdoing it. Coetzee also has a Nobel Prize in literature.

At first glance this seems odd, because Coetzee is singularly humorless and as bleak as an East German police station. He is a South African who grew up during apartheid (and always hated it) and most of his fiction is heavily autobiographical. Summertime is so autobiographical, in fact, that the main character is an author named JM Coetzee who lived where the real Coetzee lived and has done a lot of what the real Coetzee did. It’s hard to say how much of this book is actually fiction. The only thing that was obviously changed from real life is a detail: the JM Coetzee in the novel is dead.

Summertime is framed as a series of interviews conducted by a biographer of the fictional Coetzee. The interviewer talks to a cousin of Coetzee’s, an English professor colleague, and three girlfriends who never really became girlfriends because Coetzee was so intensely introverted, unromantic, uncomfortable, tactless and, frankly, pathetic.

The South Africa Coetzee describes is as bleak as himself – dilapidated, run-down and sepia-toned – and it’s clear that nobody in his right mind would want to live there. Coetzee (in the novel at least) was not in his right mind and fell in love with what the other characters regard as one of the least lovable places on the planet. And the characters are themselves hardly more positive about Coetzee – they can’t help it, they don’t have anything against him, there just isn’t much good to say.

Summertime isn’t quite as depressing as the other Coetzee novel I’ve read – Disgrace – principally because the narrator in Disgrace ends up spending his days incinerating dead dogs. Unfortunately – I say “unfortunately” because Coetzee is powerful but not enjoyable – Summertime is a fine novel and worth reading. The prose is tight, solid and spare, like 18th century Dutch furniture. Coetzee doesn’t have the English language by the throat the way Martin Amis does – he doesn’t have the imagery – but he does have the most solid craftsmanship in an English sentence to be found in modern literature. His psychological acuity is extraordinary; his self-awareness is total and ruthless. He so completely understands his own faults, together with how others perceive them, that Summertime has a strongly self-flagellistic undercurrent. I developed a slight contempt for the author’s failure as a human, which is how the interviewed characters seem to feel too.